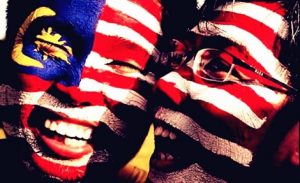 The year is 1957, excitement in the air with thousands gathered at the iconic Merdeka Stadium in anticipation at the heart of Kuala Lumpur.

The date, August 31st, citizens both young and old, ancestries spanning from various geographies awaits eagerly the declaration from its first Chief Minister of Malaya, the late Tunku Abdul Rahman, in the presence of Malay Rulers and foreign dignitaries.

The night before, a crowd gathered at the Merdeka Square (Padang) to witness the handover of power from the British.

He joins the crowd in observing two minutes of silence in darkness.

At the stroke of midnight, with the lights back on, the Union Flag in the square was lowered.

The new Flag of Malaya hoisted as the national anthem Negaraku permeates the air, and sang by those present;

Chants of “Merdeka! Merdeka!” can be heard along the Stadium.

Tunku later hailed the ceremony as the “greatest moment in the lives of the Malayan people.”– Wikipedia

cried Tunku, echoed by the people gathered at the stadium each time he uttered them, proclaiming a struggle that took decades to achieve.

What I wouldn’t give to be at the heart of this historic moment in our history as a young nation!

You see, growing up I listened both with intent and admiration some of the many first-hand accounts of septuagenarians and octogenarians describing this historic moment. Many who were as young as 9-10 years old. They described witnessing a sea of people, multi-colored and multi-lingual whom gathered on that momentous occasion to celebrate as one nation – with pride beaming from their faces as the proclamation of independence was sounded out.

On That day each and every one called themselves Malaysians regardless of creed or color.

Living in this multi-cultural setting allowed me a greater understanding of its people and its diverse background. A nation infused with rich cultural heritage and religious background that upon closer inspection, revealed all the same.

Different that we are on the outside, we remain the same on the inside – a people that wants nothing but the best for its nation.

Often-times, we were told to be thankful to be living in a country free of war, extreme climate conditions and natural disasters.

The very ailment we witness being afflicted on our neighbors and the world at large.

It resonates now more than ever today as we witness #climatechange affecting all of us on a daily basis.

Post #MalaysiaBaharu, I see plenty reasons to be optimistic about being Malaysian. We are recognizing the importance of coming together, exercising our rights with the believe that when Malaysians concentrate their efforts for the better there is no stopping what we can achieve…