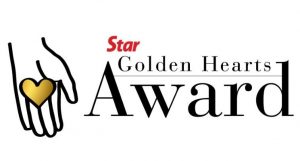 It’s amazing this doesn’t get recognized more often, back on our home front we have many such amazing individuals that made their lives ‘matter’ to others in need;

From the kids from SJKC Jalan Davison, whom won 1st place at the World Olympiad in Costa Rica with their wheat-grass growing robot invention ‘The Amazing Green‘, pioneering short-turnaround time for growth of wheat-grass which has essential nutrients required aimed at tackling food shortage.

Jazz Tan, CEO of YouthsToday.com was 14 when she lost her father to a gang-related violence. Instead of dwelling on the past, she made it her life mission towards empowering youths in order to keep them off the streets.

Diana Chan, a Malaysian-born Australian winning the 2017 MasterChef Australia, the most coveted cooking trophy on offer beating Ben Ungermann by a single point. A chartered accountant by trade she is only the second Malaysian to have won the competition.

Isak Ngau, having lost his vision at the tender age of 14 has since become a massage trainer for the ‘blind’ students learning the art and trade of masseuse. Instead of lamenting about his situation Isak chose to hone his skills for 20 years to become a recognised trainer for ‘blind’ masseurs, helping them to become skilled and independent for themselves.

In his own words, “Disability is not a barrier, laziness and refusal to change would disable us.”

Madam Grace Nesamani Raju, a #Grab driver of four months made a #specialdelivery in her car. Racing thru heavy traffic to rush a laboring mother to the hospital, instead she has had to welcome the new-born in the backseat of her car.

Lastly, the story of accidental hero Oon Thoo Seen, who braved himself to save a woman from a mangled car in an accident, shortly before it was engulfed in flame. Oon who doesn’t speak a word of Malay put it succinctly when he said;

“It doesn’t matter whether the person in need of help is a Malay or Chinese, we are all humans and we need to help each other.”

These are actions of leaders, in spite of their personal struggles they’ve refused to be bogged down by them and acted out of their kindness, and perseverance.

They are my #heroes. I am incredibly #proud in calling them my #countrymen.

Onwards to greater successes and I look forward to following their progress!

Who inspires you? Tag in the comments!